ISLAND WEDDING: From ‘Hello’ to Mr and Mrs Allen 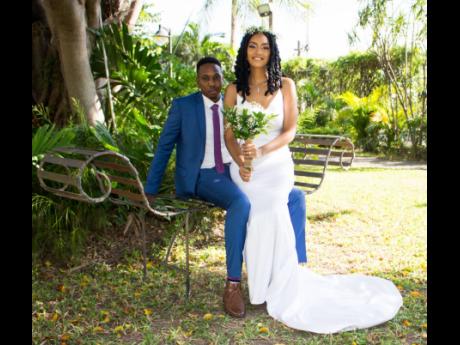 Contributed
Meet the Allens: Keneil and Jhané met after Jhané sent him a one-letter message on Facebook. That ‘Hello’ was the start of something much more for the couple, who wed in December at The Jamaica Pegasus hotel.

“You had me at ‘Hello’.” Don’t you just love when iconic television lines play out in reality? Albeit delivered a little differently than in Jerry Maguire, this simple greeting led to the happily ever after of Jhané Palmer and Keneil Allen.

The lovebirds met back in 2016. Jhané first saw Keneil in his element: playing drums at church. Her initial thought was that he was really handsome, so she inquired further and received his name. From there she looked him up on social media platform Facebook, and made her move by sending him a message.

Keneil, who had arrived home from work and was settling into his routine, checked his messages, only to see a “Hello” from Jhané. “I wasn’t familiar with the name, so I clicked on her profile to see if it was someone I knew by face. When I checked, her face didn’t look familiar at all,” he told Island Wedding. Read their story here.